Agriculturists of the Year: Myron and Dotty Miles of Miles Ranch

Posted on November 4, 2022
Home » Agriculturists of the Year: Myron and Dotty Miles of Miles Ranch

Myron and Dotty Miles are the recipients of the 2022 Agriculturist of the Year award from Oregon Aglink. The presentation will take place on November 18th at the 25th Annual Denim and Diamonds Annual Awards dinner and auction courtesy of title sponsor Wilco and presenting sponsor Columbia Bank.

For as often as they’re spotted at board meetings or events in the Willamette Valley, it would be understandable to assume that Myron and Dotty Miles are from somewhere nearby. 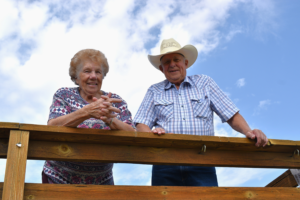 In truth, the couple puts in a lot of time driving over from their ranch in North Powder, a small town just north of Baker City. Dotty drives both ways, about seven hundred miles round trip, and they can still make it home in time for a football game at the high school where Myron holds the down marker.

Both in their early 80s, Myron and Dotty have long been living up to the “Miles” part of their name. They will go any distance to show up for others, whether that means their local neighbors in North Powder or the more general agricultural community of Oregon.

Home on the Range

Miles Ranch straddles the North Powder river just east of town, and west of the highway is Hi Ground Ranch, bought later to bring the total acreage up to 1,400. In addition to the 225 head of cattle on the property, they grow corn silage and alfalfa that is harvested by some locals each year. Although both Dotty and Myron spent years moving irrigation and raking hay, they seem happy to have found their niche and bring in help where it’s needed.

Besides the help with their crops, the Miles have a “hired girl”– a local woman with two kids who has been a valued addition to their team– and their son Gregg, who helps Myron not only with their own cattle but the other side of the ranching business, Miles Breeding Service, which offers artificial insemination and pregnancy checks for other operations.

If you hop in their SUV to ride around North Powder and their land on either side of town, Myron and Dotty speak highly of the talent Oregon agriculture has for growing so many different crops in highly diversified operations, but the pride in their own business is still evident. Every field has a story, like the rectangle of deep green alfalfa that was a “ditch full of weeds and tin cans” when they bought it.

Their cattle, too, are the result of long years of hard work. Under the mottled white faces and reddish coats of the cross-breeds, you’ll find the great disposition and a depth of muscle that make for easy handling and great beef. According to Myron, the calves they used to sell at 450 pounds in 1970 are now pushing 800 thanks to smart breeding and good nutrition. 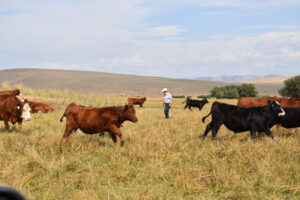 The Road to Get There

Maybe the most surprising and impressive thing about the Miles Ranch in North Powder is that it didn’t even exist until Myron and Dotty had been married for eighteen years.

The journey to owning their own operation was a long one. After the couple met at Oregon State University, technically Oregon State College at the time, they relocated between Baker, Klamath, and Josephine counties to pursue work and help out family or friends. As they zig-zagged across Oregon, they lived in a travel trailer, a schoolhouse they refurbished, and a quonset hut from World War Two. Myron worked logging, farming, railroad, and extension agency jobs. Dotty worked the counter at the Baker City Woolworth’s before becoming one of the first female forest service technicians in Oregon and then a rural mail carrier and postmaster in Haines for twenty-six years.

During the early years they sometimes kept their own herd, driving it from place to place, and other times they were moving someone else’s cattle. They both worked at a dairy at one point, part of spending years helping other farmers and ranchers take care of livestock, irrigate fields, and bring in the hay.

Eventually they worked through the hurdles of leasing and then buying property. What was once the old Davis Ranch became the new Miles Ranch in 1980, though not without its complications in financing, federal protection of wildlands, and the hard years of improving the property.

“The ranch itself was pretty challenging itself when we bought it,” says Myron. “The irrigation system was non-existent. Through long-time over-irrigation and over-grazing of the pastures they were beat up pretty bad with lots of tromped dirt, lots of humps and bumps. The farm ground was washed because it’s sandy and higher than everything else, so it was pretty badly eroded.”

Through it all, they continued with side jobs and incorporated the breeding business, but they also devoted countless hours to volunteering through community organizations like 4-H, FFA, Shriners, the local high school, the hospital– the list seems as endless as their photo albums and scrapbooks of newspaper clippings.

Myron and Dotty are what we like to imagine all young farmers and ranchers might end up becoming, whether a ranch is their family birthright or something they pulled together to buy after decades of work. The early years of 4-H and FFA obviously made an impression on Myron, and he can rattle off the FFA creed from memory amid the bustling noise of the North Powder cafe lunch rush.

It’s quite clearly more than just words, though. Back on the ranch, Myron and Dotty can point out the windows of their SUV to tell a story about nearly every piece of their land and the work that went into it.

They’re proud of their hard-won pasture quality, the integrity of the creeks and ponds that run through the property, a clever self-cleaning pump filter, the fence lines with their combination of salvaged glass insulators and new solar panel chargers for the hot wires. They built the shop to host their daughter’s wedding and then house their equipment. At the feedlot on the property, the silage and hay sit on a wide swath of finely crushed asphalt leftover from when the town had a new road laid nearby. Behind the feed rails, a concrete apron was a major investment but ultimately a smart one. It drains into a wetland they fenced to protect the soil, and the waste materials have created a self-sustaining green space with plenty of insects and birds. 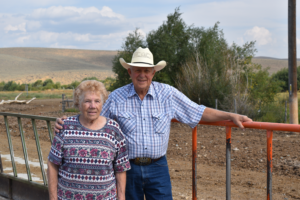 Everything has at least one purpose or use, and often more than one. Myron wishes more people realized that a lot of rangeland wouldn’t be able to grow anything besides feed or forage for the cattle. Yet even with the cattle grazing at Miles Ranch, there is still rich plant and wildlife. Myron and Dotty take turns listing the animals they enjoy seeing on a regular basis: red foxes, raccoons, elk, deer, skunks, muskrats, and sandhill cranes.

He says they look forward to the fall every year when they have local hunters out to the ranch to make memories and fill freezers for the winter. Fall is also special because it’s time to wean the calves: “It’s time to sit back and enjoy the fruits of our labor, so to speak.”

Time to Sit Back?

The Miles certainly deserve to enjoy the fruits of their labor, but whether or not they would stay sitting back for long seems like the real question. Recently, Myron climbed to the highest peak at Twin Mountain for the first time in about thirty years. He and Dotty are leaving any day now for a cruise through the Panama Canal, another item on the proverbial bucket list. 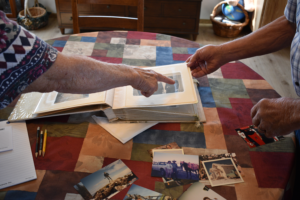 During a chat about their past travels and future plans, Dotty jokingly breaks into the old Johnny Cash song: “I’ve been everywhere, man. Crossed the deserts bare, man. Breathed the mountain air, man.” It’s fitting, to say the least.

The story of Myron and Dotty Miles is one of going any distance for their community, their family and friends, their ranch and the next generation of young farmers and ranchers. It’s good to see them taking some more time to adventure for themselves– we know they’ll be back to visit as soon as they get the chance.

Story and Photos by Allison Cloo