Name an organization for education and outreach about agriculture in Oregon and there’s a good chance Dona Coon has been involved at some point.

Oregon Women for Agriculture? Past president of state and local chapters.

Oregon Agriculture in the Classroom? Key board member in its early growth and continued development.

On November 22nd, at the annual Denim and Diamonds Awards Dinner and Auction, Dona Coon will receive the Ag Connection award for her decades of work making Oregon agriculture accessible to anyone with a desire to learn more.

Beyond her dedication and passion, Coon has impressed people with other qualities that make her an effective communicator and collaborator.

First, she has a personal understanding of agriculture that puts her in a position to speak from experience. Coon was born as Dona Gnos in West Germany, during her father’s military service there, and then raised on the family’s sheep ranch in Albany.

“Dad started his business by shearing sheep on the weekends while working at the sawmill,” she says. “I would go with him and sit in the eight foot high burlap wool bags and watch him shear. He would tie the fleece and drop it in the back and I would tromp it down.” 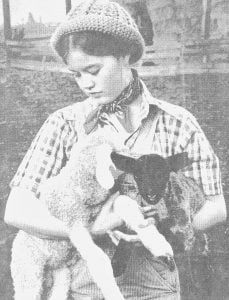 Almost anyone can learn the facts of agriculture, but according to her son Hans, the chance to see first-hand the high stakes of farm life gives weight to lessons learned and then shared by his mother. “When your dad was trying to build up a sheep herd from whatever he was making at the mill in the 60s, or you were involved in the turbulent grass seed industry in the 80s– both of those outcomes don’t just affect how you thought about industry, they really affected how you got food on the table,” he says.

Still, being an effective educator requires more than just knowledge. There’s something special about Coon that makes her able to educate people and bring other contributors back again and again in a group effort to support agriculture.

Her early love of learning, and really teaching, came through helping with her mother’s kindergarten, first, and second grade classes at schools in Albany and Lebanon: “Before I was big enough to haul irrigation pipe, I got to go along and tutor kids, put up bulletin boards, and clean blackboards.”

In her teenage years, Coon redirected to more work on the farm and becoming the first girl to serve as president of the FFA chapter at her high school as well as serving as a state officer in 1977-1978 and being the first female FFA member from Albany to earn her state farmer’s degree. It wouldn’t be long before she brought education back into the plan, though, when she began attending Oregon State University in 1979 to graduate with a Master’s Degree in Agricultural Education.

Her professional career as a teacher spanned the mid-to-late eighties, right around the time she and her husband Donald had their first child, Hans. In hindsight, that seems like a prelude to her main act: serving and building up several organizations dedicated to teaching Oregonians about agriculture.

Take Oregon Agriculture in the Classroom, for example.

Ag in the Classroom – AITC for short – started out in the state as a “resource trunk” in every county that educators could use if they were interested. While Hans was still an infant sleeping in a car seat on the floor, Coon sat on the board and got involved with multiple projects. In the thirty years she sat on the board between 1987 and 2017, Coon helped get booths at teacher conferences, moved file cabinets between several offices until they landed at Oregon State University, helped begin the Fall Harvest fundraiser, and spent years revising new editions of the Get Oregonized history book and Student Activity Guide.

The transition from a collection of trunks housed in garages to a textbook in classrooms around the state is one that many people cite when speaking of Coon. “She really is the person who kept the program alive” says Tami Kerr, chair of the Oregon Dairy Farmers Association and the first hired staff, serving as director of Oregon Agriculture in the Classroom. Recollecting the early days of Get Oregonized and the Fall Harvest fundraiser, she credits Coon with dedication and focus for the projects, but also a leadership quality that made everyone want to pitch in.

“People trust her,” says Kerr, “They like her and they want to work with her because she’s right there in the trenches getting the job done.”

The current director of Ag in the Classroom, Jessica Jansen, agrees. “When I began my position with Oregon AITC in 2014, Dona was the first person to guide and mentor me through the role. She’s consistently been a source of encouragement, knowledge and probably most significantly, passion for agriculture literacy.”

The Ag in the Classroom program has grown to the point where hundreds of volunteers read books and lead activities in classrooms, reaching hundreds of thousands of Oregon school children each year. Similarly, the Summer Ag Institute (SAI) is another organization where a little bit of agricultural education goes a long way. In SAI, Oregon school teachers earn three graduate credits over a week of courses about integrating agriculture into their own class planning.

Coon joined the board of SAI in 1987 and still serves on it today. During that time, she has recruited, transported, and hosted teachers, making them feel welcome and ready to learn.

Why would it be so important to get teachers involved in a program about agricultural education? “We can educate a teacher” says Coon, “and that teacher touches the lives of an entire classroom of future decision makers every day of the school year for as long as they teach.”

The agricultural education offered by AITC and SAI is a valuable way for Oregon farmers and ranchers to know that their stories are reaching the lives of children throughout the state. As anyone who has stood in front of a classroom or a field trip group knows, providing that education can be an education in itself.

That’s why programs like the masters in agricultural education exist at Oregon State University, where Coon got her degree, but also why organizations like Oregon Women for Agriculture (OWA) and FFA are so valuable, since they ultimately support people within agriculture telling their own stories to reach even more listeners, readers, and consumers.

Coon’s involvement in both programs makes perfect sense. What better way to put your passion for education and agriculture to good use than to make sure it continues on through the rest of the community and the next generation?

The current president of OWA, Helle Ruddenklau, thinks Coon embodies some of the most important qualities of leadership that others can learn from: “She is a strong-willed person, yet is able to get a diverse group of people to work towards a common goal. She is willing to work hard herself and sets an example for others to follow.”

Part of that example she sets is her willingness to welcome any and all to the work of agricultural education. As Tami Kerr recalls from one of her first OWA meetings over twenty years ago, Dona was “one of the first people that was extremely welcoming to me when I first joined. That’s always appreciated when you go into a room and you really don’t know anybody. You have a lot in common but you don’t know anyone.”

One simple but important facet of Coon’s reputation is a flair for artistry and craft that led to her creating floral arrangements for numerous industry events and then a business selling flowers at events and farmers markets in Corvallis and Albany.

At first glance, it’s hard to square including floral arrangements in the same list as serving as a board member or officer for multiple agricultural organizations.

Take a minute, though, and consider Coon’s flowers have appeared at a myriad of events over the years and the opportunities they present. The flowers are more than just a stunning addition to a fancy dinner or wedding. Every one of them was an investment of time and skill to grow, and then an arrangement of smaller pieces into a more cohesive whole. We can all appreciate the product in the moment, but we should recognize the diligence and talent that brought it to us.

Beyond that, every bouquet on a finely set table or under a tent at a farmers market has been an opportunity for someone to learn about agriculture from Coon while appreciating the beautiful product.

Some people might be satisfied with a high-level involvement that delegates the work of education and communication to others, but Coon’s business shows a different strategy. As others have said, she earns respect by working alongside everyone else, and her cut flower business demonstrates the same principle: use your gifts to reach out and make a connection.