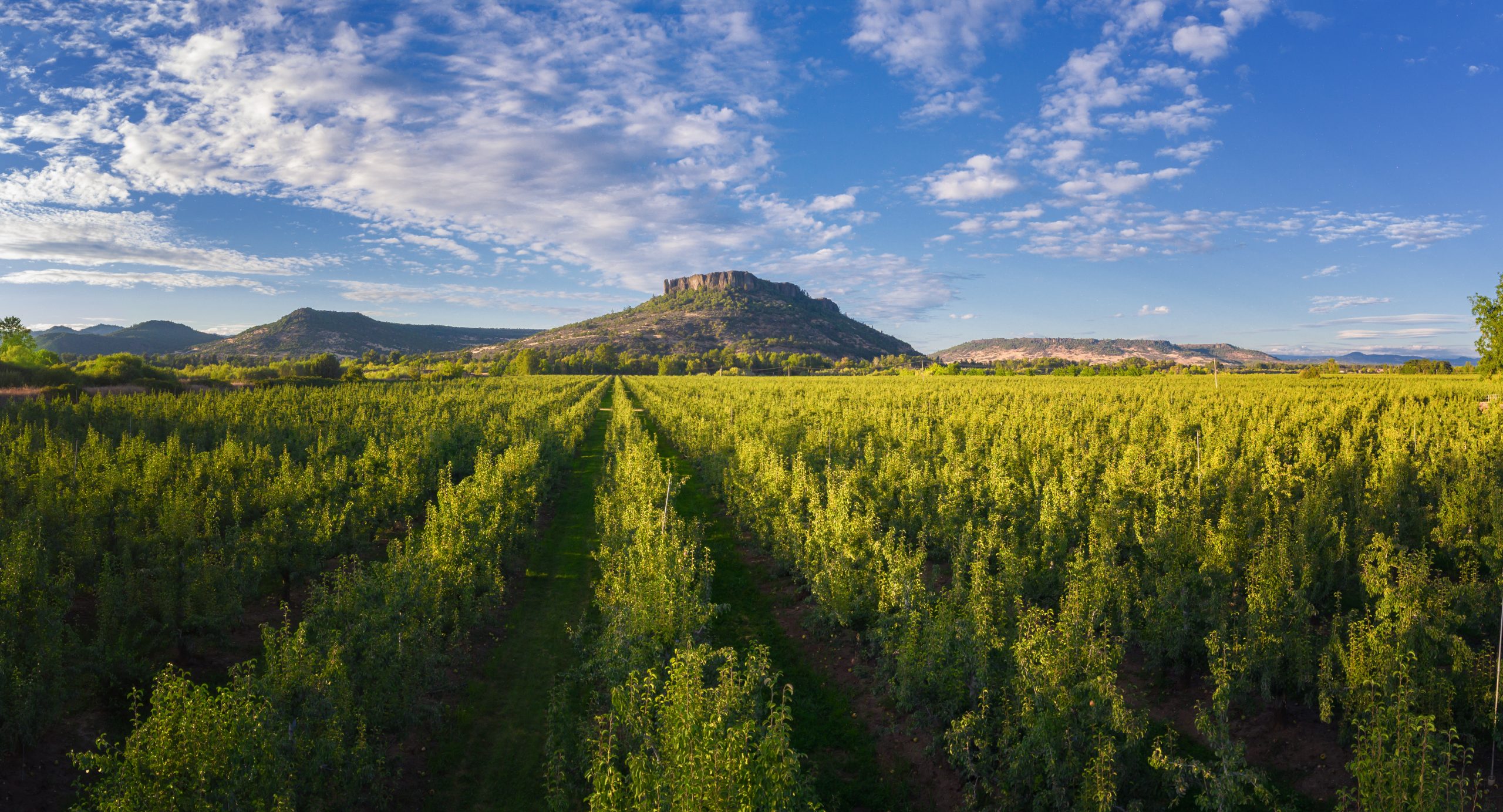 Once you realize that the average orchardist or fruit packer in Oregon will likely recognize the Naumes name, you’ll start to understand the impact the family has had on the industry from their home in the scenic Rogue Valley.

Based in Medford, with acres and facilities in Washington and California, the Naumes family has a rich history in Oregon.

While Joe Naumes founded Naumes Inc in 1946 with a partner, Steve Nye, the family started its venture into pears one generation earlier. His father was Peter Naumes, a railroader with the Chicago North Line, who moved west in 1907 to try his luck with apples in Hood River.

Many farming and ranching families will recognize the ebb and flow of major events and generational progress that create the rhythm of an Oregon agricultural family. Two world wars and the Great Depression were hard on the industry, but presented opportunities. First, Peter Naumes moved operations from Hood River to Medford. Then, son Joe Naumes returned from his service in the Navy to start his own pear business with Steve Nye, eventually buying out Nye’s shares in the early 1960s and branding the Naumes Inc we know today.

The next generation–Pete, Mike, and Sue– came to the Naumes Inc. with their own experiences in Vietnam and college, leading to another expansion into their first California branch of the business. Later acquisitions in Washington turned it into a three-state operation.

Mike’s children with his wife Laura represent the newest set of faces in the family. Triplets Sean, Joe, and Cynthia have all finished college, and the boys have returned to Medford to help with technology and logistics at Naumes Inc. 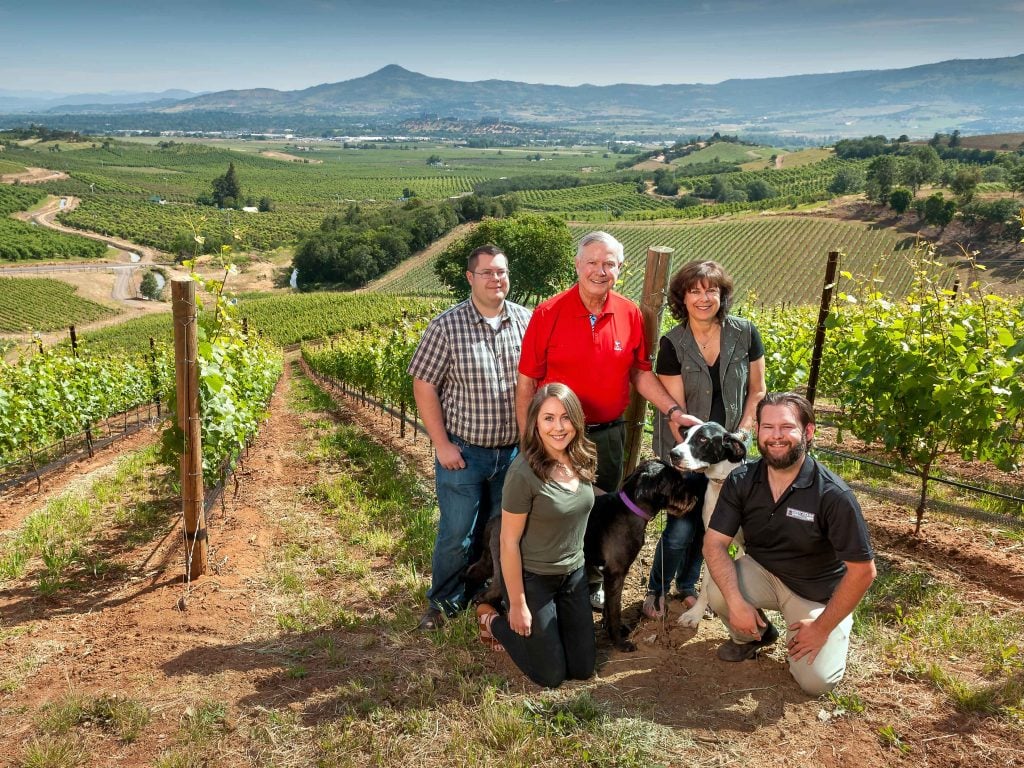 Today, the agricultural operations of Naumes Inc are centered in Oregon and Washington, with sites in California for cold storage and ambient temperature storage.

“Diversification provides a number of benefits including multiple income streams, protection from severe localized weather or disease events and provides year round work crews,” says Laura Naumes, current vice president. Over the years, fluctuating markets, land issues, and regulations have prompted the company to shift their operations as needed, but the company is still proud to manage pears as growers, packers, and shippers to domestic and international buyers.

Naumes grows nine varieties of pears–Bartlett, Starkrimson, French Butter, Anjou, Red Anjou, Comice, Red Comice, Seckel and Bosc. “The cultivation of various varietals allows us to meet customer demands for mixed pear loads in addition to full loads,” says Laura. “Having multiple varieties also breaks up the harvest so that we are not trying to bring the entire crop in all at once.”  The full harvest usually runs from late July to mid or late September, with packing and shipping following through winter.

Depending on their holdings in Washington and California, the company has grown other orchard fruits, such as peaches, cherries, and apples. Their current sites in Washington produce Granny Smith, Honey Crisp, and Golden Delicious apples; cherry varieties include Bing, Coral, and Lapin.

The latest Naumes venture is wine grapes, with their first varieties planted in Medford in 2013 to fill some blank ground and test the market. After their early successes in the vineyard, they have expanded from Pinot Noir, Chardonnay, Pinot Gris and Grenache to the newly planted Malbec, Syrah, Viognier, and Barbera. 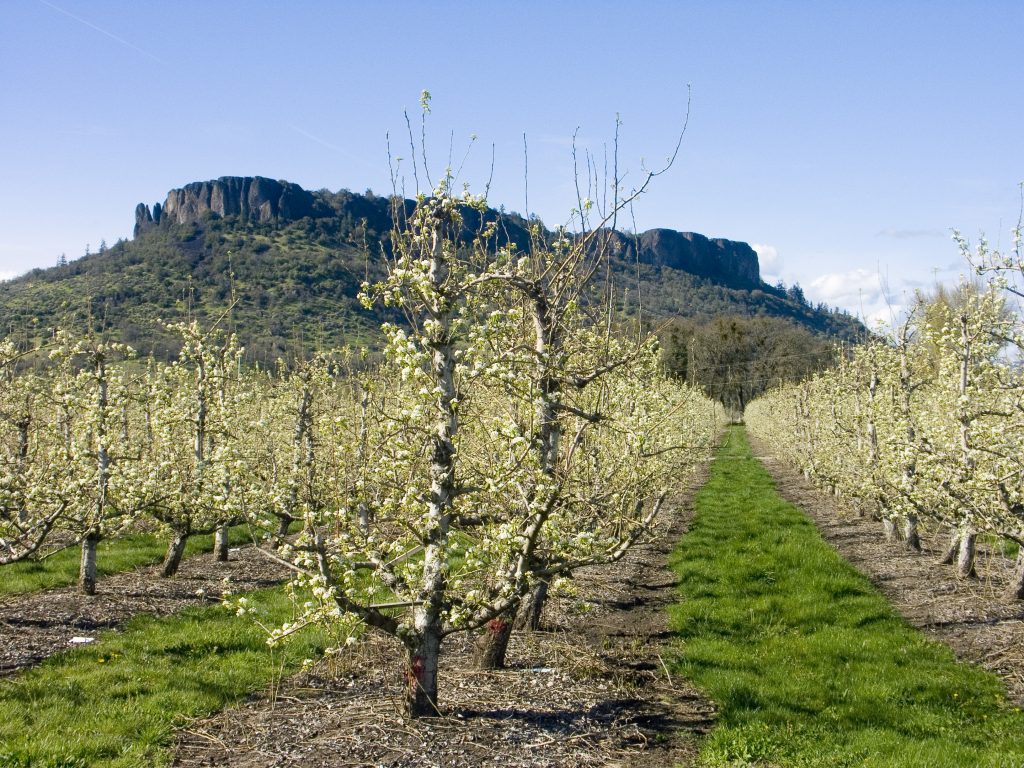 “One of the largest developments and challenges in the pear industry over the last few decades was the introduction of PLU sticker requirements from retailers in the early 90s,” says Laura. “Packing houses had to change from the old rope sizer system to in-line electronic weight sizers that could program the stickers.”

As a result of the new requirements, Naumes consolidated their packing houses. Upgrading all of the line would have been prohibitively expensive, so three packing houses became one packing house with three of the updated lines.

Similarly, dealing with labor challenges means that labor-saving technology is a boon to Naumes Inc. According to Laura, the wine grapes seem like the best place to take advantage of new developments in automation. “Vineyard trellis allows for the deployment of mechanized hedgers, pre-pruners, cultivators, leaf-pullers, and even machine harvesting,” she says. Naumes is currently running a mechanical hedger and is looking at other implements for labor savings.

The company still employs 100 to 150 year-round employees and another 350 seasonal employees from the Medford area, but the investments in equipment and new technology are a way of keeping the company flexible for future challenges.

The two Naumes boys currently involved in the business have found their own niches: Sean is mostly involved with growing and packing operations, whereas his brother Joe will be focusing on technology and operating systems.

“One of the best parts about working with the company,” says Sean “is that I not only get to work with my immediate family but also the managers and workers who I’ve known and learned from since I was a kid. It’s pretty amazing to see how many of our employees have had thirty or forty plus years of service with the company.”