Hermiston Watermelon: How Sweet it Is

Posted on August 6, 2020
Home » Hermiston Watermelon: How Sweet it Is

Oregon is fortunate to have such a share of famous and tasty agricultural products: berries we’ve developed, seed we’ve perfected, grain and nuts that travel halfway across the world. Yet one of the more enduring and iconic Oregon crops isn’t quite in our top twenty products by volume or dollar amount.

Still, as sure as you’ll find it on the table at a summer cook-out or a church picnic, the Hermiston watermelon is a crowd-pleaser for the ages.

Since the first half of the twentieth century, when farmers started planting the seeds in rotation with the other onion, potatoes, and grain of Eastern Oregon, the melons of the Hermiston area have been delighting consumers with their natural sweetness.

Watermelons come from plenty of other places, of course, but Hermiston has a climate that allows for the quality local product to show up in stores when the harvests in California and the southwest are all but done. On top of the great timing, the melons from Hermiston bring a little extra goodness to the table.

“Consistently hot days and cool…sometimes plain cold mornings lead to greater plant cell respiration, and thus an amazingly rich sugar content,” says Paul Kern, a sales representative for Botsford & Goodfellow. Buyers like seeing that local sticker, but the quality reputation of the fruit has meant that the melon is more than the marketing. Your everyday shopper at a grocery store might not know much about cell respiration, but they do know that the watermelon seems just as sweet this year as it was last year.

Botsford & Goodfellow has been packing and shipping Hermiston watermelons and other products through the Northwest and beyond since 1965. This is Kern’s twenty-seventh year with the company, and he spends four months a year at his “summer home” in Hermiston around harvest and packing time.

According to Kern, around 1200 acres of land in the Hermiston area is dedicated to watermelon each year, with most of those coming out of four farms: three conventional and one organic.

“Plantings are staggered for harvest and generally start in early April continuing through May,” he says. “The rows of plants are separated by a thin row of wheat to help protect the young transplants from  the sometimes harsh spring winds. Harvest usually kicks off around the 10th of July,” but can vary due to unseasonably cold springs or early heat.

The number of varieties has grown over the years as consumer tastes and retail needs have changed. “We grow a number of varieties as we have to accommodate a wide range of factors, i.e. size, rind and flesh color, earlier maturing, later maturing, soil conditions etc,” says Kern. The most predominant varieties in recent years are Fascination, Exclamation and Melody, all seedless varieties.

Originally developed in 1939 by Japanese scientists, the “seedless” variety of watermelon didn’t reach commercial viability in the United States until the late 1970s and 1980s when varieties were sufficiently resistant to diseases and other damage. Since then, seedless varieties have gained in popularity and market share, but Kern sees a “resurgence” in seeded varieties.

Other developments include “icebox varieties” or personal-sized watermelons that can satisfy the craving but don’t require hauling around the full-sized version.

That traditional large size, and the fact that melons are growing on their vines along the ground, are part of what makes watermelon harvest so challenging. The labor market is tight, as with many agricultural industries, and harvesting watermelon still requires the heavy fruit to be cut free by hand and pitched into field bins. From there, they are driven to the packing sheds where conveyor belts usher them to be polished, weighed, and sorted for any defects.

The melons grown and packed in Hermiston then ship out to retail and wholesale outlets across the Pacific Northwest, and even into Canada or across the Rockies, depending on the year.

There’s a hometown pride about the watermelons. The Hermiston city logo incorporates a watermelon slice and the motto, “Where Life is Sweet.” There and in nearby Irrigon, locals still celebrate with annual festivals. Each year newspapers across Oregon herald the start of watermelon season.

Farmers like the Pollocks, Walchlis, and Bellingers have been growing these melons for several generations now. Flip that around another way, and you can imagine that there are three, four, even five generations of Oregonians who have been buying the melons at their local grocery.

There’s a sense of anticipation for lovers of a Hermiston melon. The large cardboard bins that hold the watermelons in the produce section eventually show up by the front doors of the market, and the labeling shows that the harvest has moved from Mexico and California up to our own watermelon capital.

The slogan on every red, white, and green box is proof that the marketing teams have their fingers on the pulse. It doesn’t take much to get people excited for the quality that the farmers strive to meet each year. Just two words “They’re Here!” and it feels like summer has finally arrived. 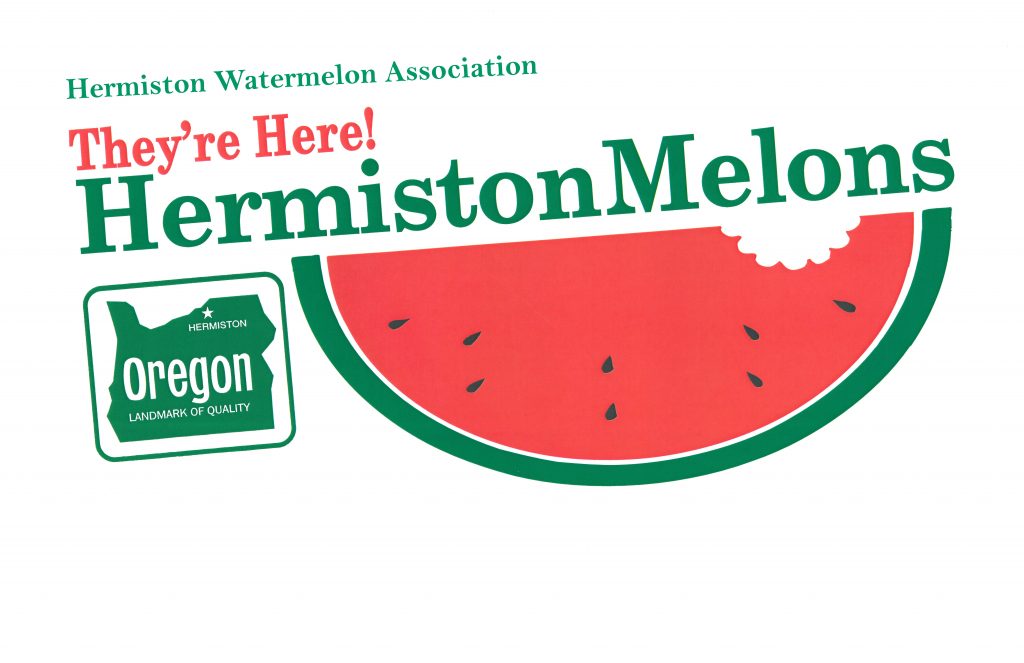 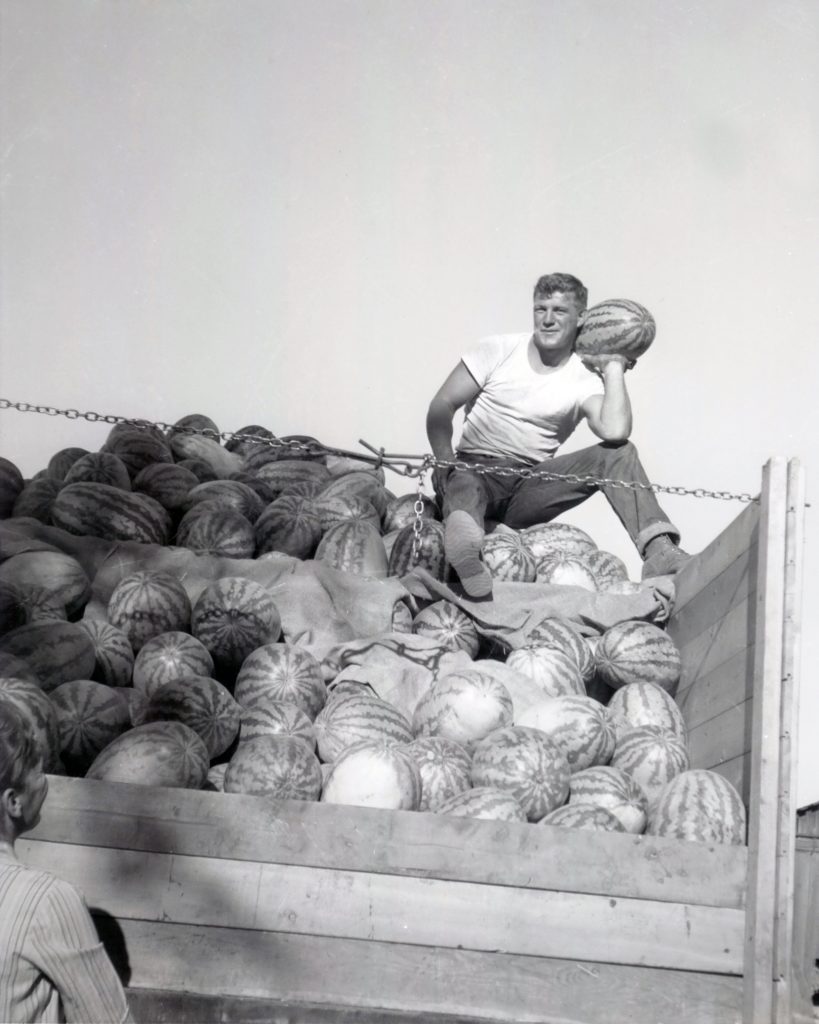 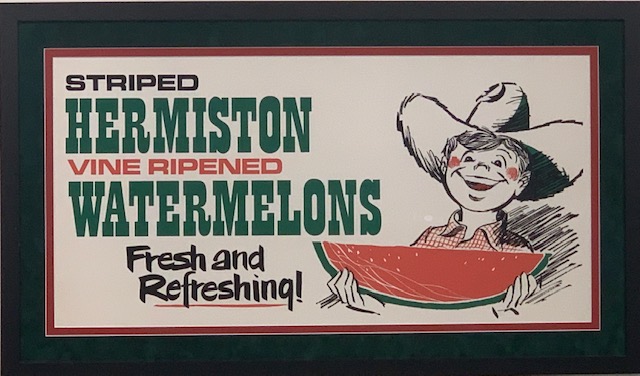 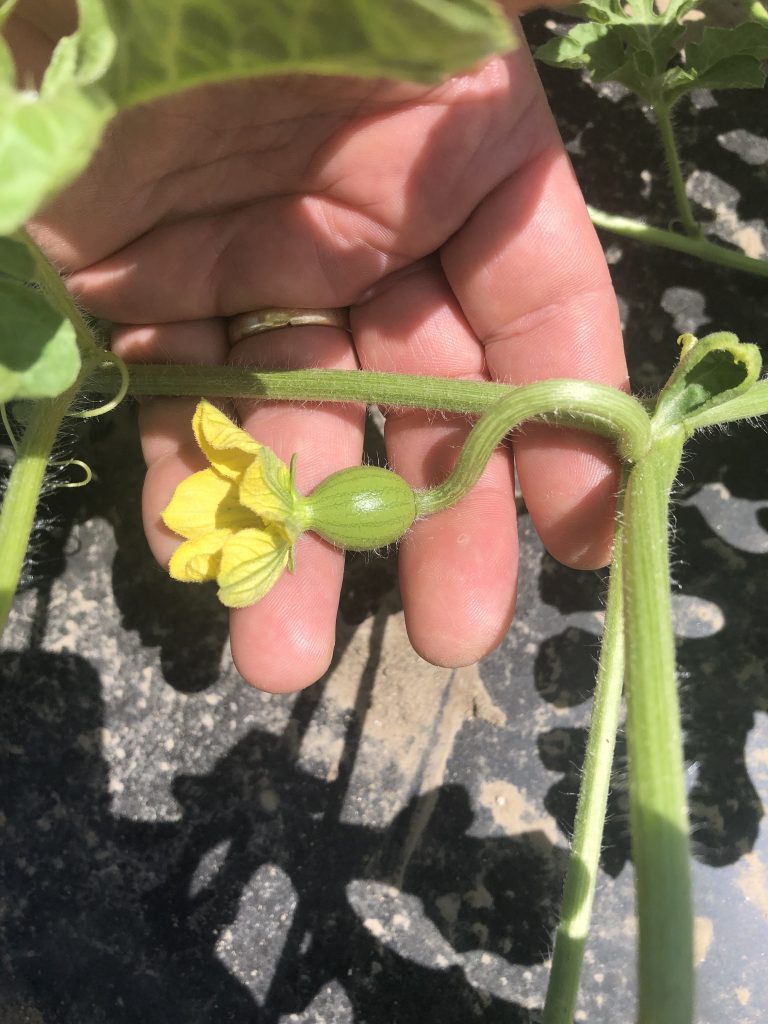